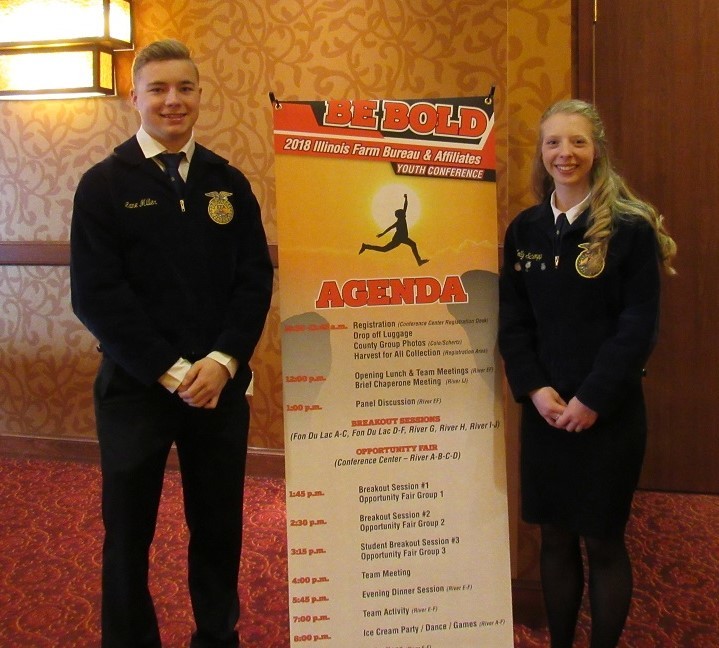 Two Olympia FFA members: Lane Miller and Molly Schempp, attended the Farm Bureau Youth Conference on April 16th and 17th in Peoria, Illinois.  The two-day event focused on providing learning opportunities to high school juniors.  Day one of the conference began with county pictures and getting to know the members in your assigned groups.  During lunch, students had the opportunity to ask college representatives from Illinois State University, Southern Illinois University, University of Illinois, and Western Illinois University their college questions.  During the first breakout session, FFA members attended the college fair and two workshops of their choice.  Both Olympia juniors attended workshops discussing the power of social media in the agriculture industry and budgeting for our future career based off of income.  During supper, members took the opportunity to hear keynote speaker Amberley Snyder, a rodeo champion, who is paralyzed from the waist down.  Amberley motivated youth to never give up and make the best of what they are given.  The evening was concluded with a group activity, dance, and ice-cream social.

Day two was brief, but impactful.  Before members went home, they attended two more workshops during the second breakout session and concluded the conference with the final keynote speaker.  Fire Marshall Doc Patterson was a powerful speaker who reached many topics, but overall encouraged members to work hard in everything they do and be a powerful person.  Lane Miller reflected on the event saying, “My favorite part was the dance, leaving knowing more people than I knew at the beginning, and attending workshops that were realistic towards life.”