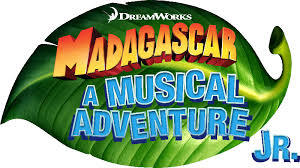 A production of Madagascar, a Musical Adventure Jr, takes place June 1, 2, and 3 at U-high’s Stroud Auditorium; six of Olympia’s  students will perform in the musical.

The production will take place on June 1 and  June 2 at 7pm, and June 3 at 2pm. Ticket prices are $10 for adults and $5 for youth (up to high school). Tickets are available at the door and two weeks in advance at stroud.ticketleap.com.

OHS students Katy Peifer, Wesley Hymbaugh, Aly Davis, Hannah Baker, Dylan Olson, and Dakota Birkey are all in the play. Junior Dylan Olson said, “I feel happy that we are doing the play.” He will be a newspaper man in the performance.

Junior Hannah Baker is playing an Old Lady in the Musical and she said she also has a role as a talking steak. There are many different songs but Hannah’s favorite is “Relax, Be Cool, Chill Out.”

Other students around the same age, without disabilities, will join on stage as “Peer Mentors.” These mentors have volunteered to guide the actors through four months of rehearsals all the way to the final production.  The location of the performance is University High’s Stroud Auditorium in Normal, IL.

The musical is based on the DreamWorks animation motion picture and book By Kevin Del Aguila.